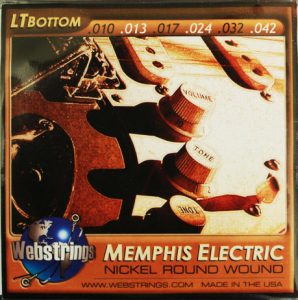 That’s not the case with Webstrings. I’ve used their strings plenty of times, and I’ve found the quality and sound to be about the same as most low-mid range branded strings (D’Addario, GHS, etc.)

They don’t spend any money on advertising, and they sell direct to the customer – as opposed to the usual model of Manufacturer -> Brand -> Distributor -> Store – where everyone at each step is making money.

On the website, they mention D’Addario, GHS, and Ernie Ball, but they don’t say specifically that these are the same strings, it’s more used as an example.

Are they Bulk Strings?

If you’ve ordered bulk strings in the past, you know it can be kind of a pain – you might get a bag of 20 high E strings, and they’re not packaged well, or they’re all tangled up. Webstrings packages the strings just like the ones you’re used to, only they put two strings per paper envelope, so there are 3 envelopes in a standard set of guitar strings.

Of the 10 or so sets I’ve used (both bass and guitar strings) I’ve found that there is no difference in sound when compared to the brands above – none at all.

They come sounding bright, and stay that way for about a month for guitar strings, and longer for bass strings. The decline in brightness is very slow – you could probably get two months out of these strings on a guitar, and I’ve easily done 6 months on the bass strings. But at this price – there’s no sense in waiting to change them out – unless you really really want to save some money!

The feel is the same on these strings as their more expensive cousins. I don’t notice a difference.

How is the shipping?

The shipping is fast – pretty much standard. You’ll get them in about a week. You’ll pay $6 roughly for shipping, and if you order $80 or more (That’s about 26 sets of guitar strings) you’ll get free shipping – if you’re in the US.

What kind of strings do they have available?

They have pretty much everything. I’ve used the electric strings and bass strings, but they’ve also got 7 string options, 12 string options, acoustic strings, classical strings, banjo strings, flatwounds, and more. Within the “electric” category, there are 14 options for different styles and string gauges.

How is the customer service?

I had a pretty good experience with their customer service. I accidentally entered the wrong address (actually it was a PayPal thing) when I made my first order, and I immediately sent their customer service an email. The next morning, I had a response from them (basically “No problem”), and my strings arrived less than a week later – to the correct address.

I’d say give them a try. You can’t really lose, in my opinion. I don’t use Webstrings exclusively, but I do buy from them frequently. I’ve gigged with them, and I’ve recorded with them. When I run out and need a quick set of strings, I’ll still go to the guitar store and pay two to four times as much, but when I’ve planned ahead there are always some Webstrings around.