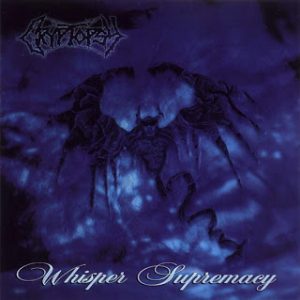 Cryptopsy is a band known for a number of things. Speed, intensity, and variety. “Cold Hate, Warm Blood” off their third album Whisper Supremacy was one of the big stepping stones in Cryptopsy’s career that solidified them as a band that will be forever morphing into something different.
Even if you don’t care to get the speed up to Cryptopsy’s absurd tempo, just understanding the principles that make it work the way it does can give you insights on how to keep variety in your style. Just because you write a riff one way, doesn’t mean it can’t be played another way. Or another, or another.

Take the opening riff pictured below for example. It’s a series of minor 3rds with open strings in 4/4. At face value it doesn’t really appear to be much, but those two open 1/8 notes at the beginning of the first and fifth bars kind of offset the emphasis a bit, but on the third and seventh bars the minor 3rds hit right on the strong beat giving the riff a sort of fluctuating energy. Playing around with the emphasis like this can be a huge stepping stone to much more complicated things that bands like Cryptopsy, Mudvayne, Meshuggah, and Dream Theater to name a few have become well known for.

“Cold Hate, Warm Blood” is riddled with tiny little bits and pieces that keeps the song from sounding like a bunch of repeated riffs. The following times that riff (or really any other riffs throughout the song/pretty much their entire discography) shows up it features slight variations, from a quick change of time signature to the seamless flow into clean guitars.  Tricks like that sound good, but it goes deeper than just exercising way too much attention to detail.

For the listener it’s relaxing on the ear whether they even notice it or not.  Just because you don’t necessarily say, “gee whiz, did you guys all hear that snappy dominant 7th they threw in for that last 1/16 note in that solo?”  That doesn’t mean you didn’t feel it.  In this context from a learning perspective there are ideas that can be translated to other situations with invigorating results.

While I’m not going to go into a huge speech about how I think you should approach learning a song like this, I will say this is possibly the most intense thing recommended yet. If you want to truly master this song you’re going to want to be patient and start slowly. And I mean slowly. This song has a lot of complex riffs with abstract notation and odd time signatures. It changes the rules frequently and will keep you guessing.

As I’ve been tinkering with it for the past few days myself I’ve found playing around with a riff a day has worked pretty well for me, at least in getting the feel for it. Getting it up to tempo is a whole different story that requires patience.

Same goes for the guitar solo. It’s a balance of shredding and articulate melodies with a lot of technique throughout. Jon Levasseur’s style has demonstrated exceptionally proficient technical solos that exercise about any technique that’s ever been thrown at the fretboard.  What makes the solo work so well is how well it locks in with the rhythm.  It’s tight and it’s not just shredding for the sake of shredding.  There’s a lot of attention to what the rhythm is doing with the solo designed to bring out the best.

Now, as I’ve stated probably too many times now. This song is intense, so if you shoot for the top speed you’ll probably want to do some stretches beforehand as well. Unless you think that carpal tunnel syndrome will somehow help your playing.  After warming your muscles up get to it.  Think you can learn this one in a week?