Weekly Guitar Challenge: Meatloaf – I’d Do Anything For Love

This week we’re going to try something a little bit different. We’re going to tackle a song that has guitars, but isn’t really based around the guitars. It’s a widely praised song, a classic, and an ambitious work of art that sets the bar for song writing. This week we’re looking at the Meat Loaf hit “I’d Do Anything For Love (But I Won’t Do That)”.

So Why “I’d Do Anything For Love?” 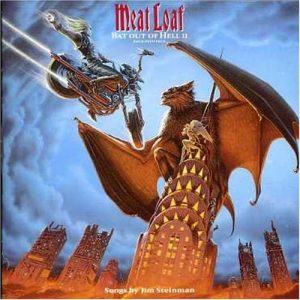 Oh, jeez.  Why wouldn’t you learn this song?  The songwriter Jim Steinman, on “I’d Do Anything For Love”, has stated:

“That’s my favorite song on the record – it’s very ambitious.”

Yes it is, Mr. Steinman. Yes it is. To call this song ambitious actually seems like an understatement to how powerful it is. Every last note has so much attention to detail and it’s all tied together so smoothly and seamlessly. Not a second of the song feels contrived or rushed. Simply put “I’d Do Anything For Love” is a masterpiece.

This song has it all. What can’t you learn from a song like “I’d Do Anything For Love”? The song is long yet still has a very accessible structure. Its dynamics go from soft and somber to booming and earth shattering. It has relaxing moments and fits of energy. The song as a whole really feels like it’s going somewhere. It’s not like a number of the other songs we’ve covered in that it’s not really a guitar song. People don’t listen to a song like this just for the guitars. They listen to it to hear how all the different principles tie together to make this great big experience that we hear.

So the real incentive to study “I’d Do Anything For Love” is for the sake of studying songwriting. Jim Steinman is a great songwriter and while he is a pianist compared to the usual guitarists we talk about, but Steinman is no stranger to arranging music for the guitar and to very satisfying results. The song has excellent choices in chord progressions with a lot of melodies carefully sculpted around them, and especially in the case of that duet at the end. Learning music like that will help you learn how to play your guitar like you’re actually speaking with it. Like you’re really speaking in the language of music.

Tips for Learning This Song

As far as tips are concerned it really depends on what instrument you’re trying to play. The guitars in specific really don’t have a lot of overwhelming surprises. The rhythm guitars themselves aren’t overly complicated. They’ve got a groove that may take a few shots to get the hang of, but the notation is pretty straight forward and played as power chords. Just take a moment to figure out the chord progressions and pay attention to the beat.

The solo and lead guitars in general are very melodic. There are moments of shred but nothing that a bit of patience can’t take care of. At parts guitarist Tim Pierce’s work is very Satriani-ish with his squealing harmonics and light tremolo bar use. The challenge for nailing guitars like Pierce’s isn’t necessarily getting to the right fret at the right time, but more so matching the feel and power he puts into it, and the only way you’re really going to do that is learn it and make it your own.

Now, just because the guitars have been covered doesn’t mean we can’t or shouldn’t mention the other instruments. Meat Loaf sings some brilliant melodies, there are those backing singers that belt out harmonies to reinforce the mood, and the duet at the end. Learning melodies… I think takes a certain kind of perspective. From a technical standpoint playing any of the melodies the singers sing on a guitar isn’t really that hard. The big thing is just paying attention to the notes and the notation that make the core of the melody what it is. Everything else is built up from there.

On top of that, speaking of chords, progressions, and insight. The pianos and organs. One of the handiest ways to exercise your fingers is to play music on an instrument it wasn’t designed to be played on. Often times guitarists plain and simple can’t play what a pianist plays exactly the same way. Most guitarists are limited to just 6 notes at once. However if you take what the pianos are doing and you find a clever way to adapt them to the guitar your style will improve in leaps and bounds.

So there you go. That’s Meat Loaf’s “I’d Do Anything For Love”. Go give it a shot and tell us what you think. Rock on.