Seeing as how it is the 13th issue, I thought I would depart slightly from the usual format and spring a little test on my faithful readers. Yeah… you two… in the back!

Wow! Lucky number 13. I was born on the 13th. (Yes, it was waaayyy back in the day.) Kind’a conjures up stormy nights, black cats and bad luck… Nah. I was born at 3 o’clock in the afternoon on a Saturday. No magic here! 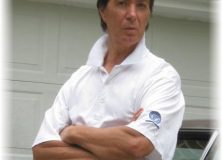 Who? Yeah, that’s what I said, too. Have you ever tried one? Have you ever seen one? I’m talking about the American Dillion here, not the ones from Canada. That “Mod Squad” dude to the right is John “Dillion” Vinci, from the ’70s band “Illusion”.

Farther over is the same guy in his 2010 persona. He founded Dillion in the mid ’90s, after working in sales for several big guitar manufacturers including Dean, B. C. Rich and Guild.

Dillion guitars are made in Korea. They offer Strat, Tele and other direct copies, as well as mandolins and many guitars of their own. Orcoast Music has a used DR-450 F/X in stock and I played it the other day for the first time. 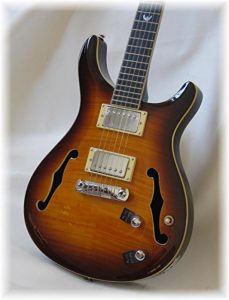 Pictured at left, it is quite striking in person and plays beautifully. 24 frets, Wilkinson Wrap around bridge, custom Alnico Humbuckers, coil splitting wiring and Grover tuners are some of the attributes that adorn this guitar. The semi-hollow body behaves much like an ES-339, and has that sound to it. Being more Strat shaped, though, I found it more comfortable to play for any length of time. It’s also quite well balanced on a strap.

Gibson has asked them not to make the, 335, SG, Firebird and Flying V and they appear in the catalog with a “Discontinued at the request of Gibson guitars” note attached, but the Les Pauls are still available. 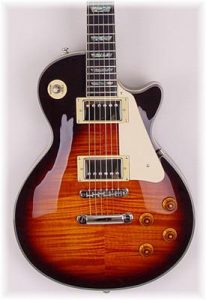 As you can see at right, they rival the original, right down to the coil taps.

Quality-wise, they not only look like the originals, they play and feel like the originals, too. The LP at right goes for $1249, and the DR-450 lists at $799, so they are a little less than their American counterparts in price. The new Gretsch Electromatics are Korean made and many reviews list them as playing better than the old Gretsch American made guitars. I’m not sure that’s true, but the Electromatic is a wonderful guitar in your hands. The Dillion I played was a delight, with a slim taper, yet wide 1 & 11/16″ nut width neck, ala Gibson, and an overall feeling of first rate quality throughout. I dunno, for another $400 I can have the real LP. Why make do for that difference? Finding a used one that’s had good care, with a decent price, is another matter, though. Worth a look at .

I know I have talked about these before, but I have had the chance to actually play the I, II and III now and have some new impressions you might be interested in. The Mini, the I and the II are all fairly similar in their features (talking modeling and effects here), but the bar changes with the III.

The Mustang III, and the IV and V, have 100 preset storage, 12 amp models, 7 stomp effects, 11 modulation effects, 9 delays and 10 reverbs, all completely, and easily, adjustable with the aid of the editing screen and Fuse software. All the other great Mustang features are there as well; USB out, headphone jack (that doubles as a speaker emulated line out), Aux input, tap tuner and Celestion speaker. The III pushes 100 watts into a single 12, while the II is 40 watts into a 12 and the I is 20 watts into an 8.

Playing it is easy, but getting the most out of it means you gotta read the book… no other way around it, guys. It’s a little frustrating playing “what does this do?” because there is so much you can do, working yourself into a hole is too easy. I did it, and had to turn it off and start over!

The models are awfully good. The sound of those Supers, Twins and Champs brought back some fond ’60s memories from the way-back machine in my head. The Mustang III starts the real Mustang line. Check them out at Fender.com.