I got the chance to play a beautiful Fender Elvis Kingman dreadnought the other day, one of the most striking guitars I’ve seen in a while.
I know you guys get tired of hearing about Fender Products but I don’t have a lot of options up here on the Oregon coast.

I want to talk about a really unusual guitar from Fender Acoustic, the Elvis Kingman dreadnought, as used in the movie “Clambake” from 1967, and again in “Double Trouble”. The guitar is really distinct in that the sides, back and headstock are made from Fender’s mid sixties “Wildwood” finish, where beech trees were dyed in distinctive colors before being harvested. 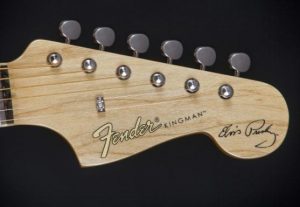 Elvis’ signature adorns the front of the headstock and the guitar features a maple neck with rosewood fingerboard and block inlays, a dual checkerboard rosette and solid spruce top with scalloped X bracing for a full and resonant tone.

I can attest to the tone part. This guitar sounds really good and plays even better with a very nice feeling neck in that familiar Fender shape that I like so much. I haven’t actually found too many Fender acoustics that I like. Most of the necks are just not the right shape for my taste.

The Kingman plays like they stuck a Strat neck on a dreadnought body. It feels comfortable in your hand which was a real change for me. At $399.99 (street), it’s a steal. 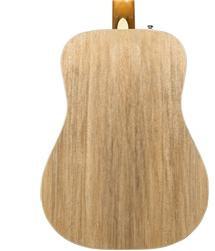 The image at left shows the back, which is really nice in person but doesn’t translate as well in the photo. The guitar has a five-star gloss finish that really sets off the Wildwood. The dealers are calling it burnt maple but, according to Fender’s website, it is the dyed beech. I would’ve liked a color other than “smoke” in the wood but it is still striking to look at.

Anyway, a great looking, sounding and playing acoustic at a 400 buck price tag is always a good thing.

I just got my June issue of Guitar Player in the mail. Inside is an article about the testing of 6 practice amps; Vox AC4C1, Peavey Backstage II, Orange Micro Terror, Gretsch Electromatic G5222, Fender Mustang Mini and the Blackstar HT-1R. Out of those 6 amps, guess which one got the Editors’ Pick Award… Ha… the Fender Mustang Mini.

I have been touting the Mustangs enough so you guys must think I’m on the Fender payroll. Finally, I don’t feel alone in my feelings for these amps, which are all digital, says this tube amp guy.

They liked the Orange and the Vox as well (the AC4 is an awesome amp), but deemed the Mustang the best for the purpose of practice and recording, the only real practical use for these little amps. Don’t forget the old Fender Champ appeared on thousands of recordings since the 60’s.
So, I’m feeling a little like I may have an inkling of what’s right and good in the world. Thanks GP!

Is there any way to find out how many Elvis Kingam guitars were made/sold in America? This may be a collector’s item, a Fender acoustic that does play well. Best action ever.

I bought one slightly used off Craigslist. I got it for $249 and I am as happy as a “clam”. Mine is mostly blonde wildwood, a beautiful work of art. The tone is a little bit green (young wood lacks the rich resonances that come after a few decades of aging), but what do you expect from a year=old guitar? Made in China, the fit and finish couldn’t be nicer. Definitely a beautiful guitar.