I was lucky enough to spend a few hours in Guitar Center this weekend but, instead of my usual focus on $400.00 guitars, I spent my time playing the instruments at or over $1,000.00. I’ve done this before but there just hasn’t been the plethora of enjoyable instruments as there were this time.

Gibson has started producing more “Slim Taper 60’s” necks on their guitars than ever before. Yes, you can still get the “baseball bat” neck if you’ve a mind to, but it seems that the buying public have spoken and convinced Gibson to produce those old, wonderful necks that those of us without the six-inch finger length appreciated. Praise the short finger Gods, whoever you are! I didn’t pick up one Les Paul, ES-335, ES-339 or Epiphone that I didn’t just love the feel of.

2013 is a great year to buy a guitar, people. Everybody, and I mean almost every manufacturer, has reissued, redesigned or created a new guitar that is
to die for, some of which are not unreasonably priced. 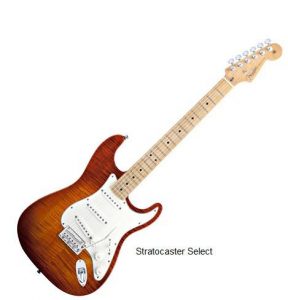 Fender has produced the Stratocaster Select that is a mindblower for 2013. The Select isn’t new, having been around for a couple of years now, but I have never seen one in a store. Guitar Center is sold out online. (Does that say anything?) I had the opportunity to play one on Saturday, after playing the $129.00 Squier Strat, the Affinity, Player, Standard and American, right on up to the $2000.00 Select.

The Strat Select is an American Standard Strat that is made from hand selected components. In addition, it has a flamed maple top added to the alder body and special “Select Series” pickups that really do sound different than the other pickups I’ve heard on a Strat. It’s as close as you can get to a Custom Shop instrument and still be produced on the line in Corona. Unreal player for an assembly line instrument. The most expensive non-Custom Shop guitar but an absolute stunner in looks, sound and playability.

My old Favorite, the Epiphone ES-335 DOT, is out with a Slim Taper neck as well. It had an acceptable neck before, and a wonderful warm and full tone from that mahogany center block but now there is that wonderful neck that was missing. It still has its $399.00 price tag, too. (Sorry, but I will always play this guitar when it’s there, calling my name from the wall.)

The ES-339 sports a 1950’s “C” shaped neck, which I don’t like as well as the 60’s Slim Taper, but it isn’t bad. I could deal with an Antiqued Cherry Red 339, even though it runs $2599.00. Epiphone now produces this guitar as well, called the ES-339 Pro (named for the new Pro Series Humbuckers that feature coil tapping with push-pull volume pots) for $399.00. I’ve not had the pleasure of playing it but it has the mahogany center block like the Epi 335, so great, warm tone should be its forte.

Those are the notable new guitar “finds” for this issue, but I looked through the rather formidable offerings of used guitars and found a couple of gems for sale at the Medford, Oregon Guitar Center. 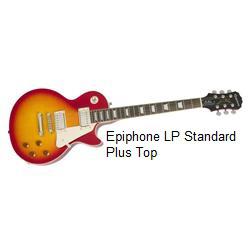 First was an excellent Epiphone Les Paul Standard “Plus Top”, in Heritage Cherry Sunburst for $249.00. This guitar is in such perfect condition that the paper Chinese inspection stickers are still on the back of the headstock! I kid you not, there wasn’t a scratch on this baby. This guitar has a street price of $499 new. $249 is half price, and it looked every bit as good as the new ones on the wall. The best part: it had the “Slim Taper” neck! It sounded and played perfectly but I just couldn’t swing another guitar right now. Damn!

Here’s the other little gem… a Hammer Echotone.

This guitar is no longer on Hammer’s website, so I am assuming it has been discontinued, but it is a sweet guitar for the $299 GC was asking for it. Very much like an Epi DOT but with a little flatter neck profile. It felt like a 12″ at the nut… maybe even a 14″ radius.

In any case, it played very nicely with good feel but a tad too much neck for me. You guys with bigger hands may like it as it has the ES-335 sound nailed.

That’s it for this issue… keep the shiny side up!