Fender just announced the Mustang Amp series at NAMM, but my local dealer had one in the store a week ago, the Mustang Mini. This is a small, 7 watt* amp that runs on battery power (6-C cells), or the included wall wart AC power adapter. It lists for $139.00 at the store ($129 online) and the features and sound are pretty impressive for an amp this small.

How about 8 amp models, 12 effects, on-board tuner and 24 on-board presets. Plus, the carrying strap is also a tilt-back stand to send your sound up toward your ears. Fender Fuse software is included for infinite adjustability of the on-board sounds.

Here are the amp models:
’57 Champ, ’59 Bassman, ’65 Twin, ’60s Brit, ’80s Brit, Amer ’90s, Super Sonic, and Metal. Most these sounds are pretty good… not perfect… but pretty good. The software allows you to tweak almost everything about this amp so dialing it in for yourself ought to be easy.

You may not think a 6.5″ speaker could handle the above at anything above a whisper but I thought I was playing too loud in the store on “1”. On “10”, crystal clear ’65 Twin, loud enough to draw looks from everyone and make the snare drums buzz, 40 feet away! (Are you kidding me?) It wasn’t all fuzzy or garbled either – nice and clear.

The Effects:
Tremolo, vibrato, reverb, delay, wah, flange, chorus, octaver, pitch shift (nobody lists them all, including Fender) built-in and fully adjustable. Tweak your sound and save it as a preset in one of the 24 memory spots.

Controls:
Preset, Effects, Gain, Volume, Treble, Master, Save Button, Exit Button and Tap Tempo Button. The Gain and Treble controls are programmable with the Fuse software. The Tap button sets the rate for the delay, vibrato, tremolo, etc… Press and hold the Tap for the tuner (really handy when playing multiple guitars in the music store). A 2 button footswitch is an option that allows access to 2 presets you can choose.

Go on Fender.com to check out the other Mustang models which range from 20 to 150 watts in various cabinet and speaker configurations. Watch the Mustang demo. They use the Mini and it really sounds like that! 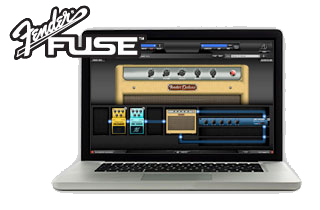 Any of you guys that already have a G-Dec or Champ X2 know about Fuse but I went to the Fender website and took the tutorial. You can tweak your sound on your computer, and it tweaks the amp in real time.

Plug in your guitar, play the sound – tweak the sound – play – tweak – play… until it sounds just right. Save it in one of your presets on the amp and add it to the unlimited number of sounds you can save on your computer.

You can swap them in and out, trade them online… whatever. The Fuse Community even has Artist designed sounds online for free download.

These Mustang amps are pretty slick. High praise from a tube amp lover! Check ’em out.