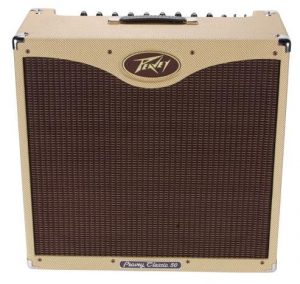 Has anyone played one of these? I’m sure you have. They’ve been around since 1991. I stopped into Orcoast Music today and played a used one with a Squire Classic Vibe Tele. Can you say Super Reverb? Not quite the same because of the EL-84 power tubes but, at low volume, it has that Fender feel and tone. EL-84s break up at lower volume than 6L6s do, which is why many amp makers use them to get tube distortion at lower levels.

The Peavey has 3, 12AX7s in the preamp section and 4 EL-84s in the power section to produce 50 watts into 8 or 16 ohms. The amp has an effects send/return loop, reverb, presence, 2 channels, both channel and master volumes, and footswitch control of reverb and channel switching.

I like tube amps, period. The digitals are really making headway and closing in on that tube sound but, so far, no digital amp can produce that “follow me” reaction of a tube amp. This Peavey amp had a beautiful clear and ringing tone with that Tele, and a great jazzy tone with the Treble rolled off on the guitar. It had all the harmonics typical of tube amps, and plenty of expression, even at fairly low volume. The only thing lacking was the tube tremolo of the old Fenders. If it had that, I would probably snap that puppy up. These run $999 street so they give the Fender a good run for their money. Peavey.com for details on all the Peavey stuff.

I also played a Heritage Amplification, Victory model amp, but they are out of business and their domain name is for sale. The amp was beautiful with fabulous tone and nice reverb in a 1-12, combo configuration. It’s disappointing that these manufacturers can’t keep going, although, in the case of the boutique companies, the prices are usually prohibitive enough so there isn’t a mass market for their products. This amp is sooo nice… Peavey and Fender, eat your heart out. John was out sick today so I’ll have to ask him where he got it the next time I see him.

By the way, I don’t think I ever reported the results of my email to Gibson about the “Cupcake” smelling Les Pauls. For those who missed the original question, the Huntsville, Alabama Guitar Center swears that their Les Pauls smell like cupcakes when they open the cases. I gave them the olfactory test and, sure enough, there is a faint vanilla smell to them. So, I sent Gibson an email and asked what the smell was. Well, they didn’t reply. I called them while doing research for another article and asked the question while I was on the phone. Turns out, just as I thought, the smell is the nitrocellulose lacquer they use for finish, just like the old days. It smells differently to different people. I smelled vanilla, the Gibson guy said he smells bananas. So, if you buy a new Les Paul, don’t be alarmed if you get hungry after opening the case!