First things first: In Issue 7, I played a black Takamine model EG260c and wasn’t too impressed. Yesterday, over at Orcoast Music, I played a used (1983) F360c acoustic only, that was not only gorgeous (spruce top and rosewood back, sides and headstock and mahogany neck) but was a dream to play. Point of fact, I liked it so much I traded my Ovation for it. It now resides at the Stratkat Home for Wayward Guitars. So, Takamine fans, they do make some fabulous guitars, I just didn’t find one the first time around.

I played a beautiful Cherry Red Electromatic today and was impressed by the playability, finish, detailing and the weight. It’s really light. No groove in your shoulder after playing this lady all evening. At $875 street, it seems a little expensive for a Korean made guitar, but there is no lack of quality evident in this Gretsch.

The Electromatic sports a solid maple neck with rosewood fretboard and a 5-ply laminated maple body. The old Filter-Tron pickups are present and that explains the traditional Gretsch sound. The old-time “G-arrow” knobs are back, too. The only non-traditional Gretsch thing on the Electromatic are the neck blocks. Gone are the little half moon markers in favor of the big “hump block” inlays.

I have only two dislikes: they still don’t glue the bridge down (what’s up with that, anyway?) and the tone is just too bright for me. It’s pretty hard to get a nice jazz sound out of it without getting it muddy. Hat’s off to Chet for getting every tone known to man from a Gretsch! Other than that, this is a really fine guitar. Get the story at Gretschguitars.com. 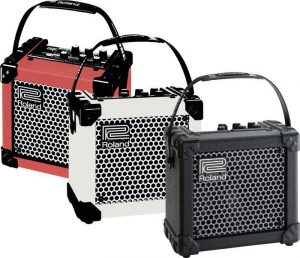 Roland has been selling the Cubes for a while now, and, since my store had quite a few different models, I thought it was time for a look. The Cube series comes in multiple versions from the Cube Lite, a stereo radio look alike, to an 80 watt, 3 channel version with a 12 inch speaker, ten models in all. The higher wattage amps are not battery powered but still small and light enough to toss in the back of the car for a trip to the gig without hiring roadies. The smaller, battery powered Cubes, work great as practice amps, recording or any small gig that doesn’t require face-burning volume. There’s even a stereo acoustic Cube that includes mic and aux inputs, with built-in mixer, reverb and chorus. Get this… it mounts on a mic stand, an inexpensive and easy way to get the sound up in the air and through a room.

The Micro Cube, shown above, has 7 amp models, 6 effects, line/headphone output and aux input to jam along with your MP3 player, in a 6 watt package. Not bad little amps for $129 street. They also make a 5 watt stereo version, MicroCube RX, shown at left, with all the features of the MicroCube plus a rhythm section for $280 street. The rhythm section has every beat you could want to practice with, including a metronome sound, and, it comes in a bass version.

I played the stereo MicroCube RX, the MicroCube, and the 15 watt Cube 15XL, not shown, with 2 channels and foot switch. All of them were voiced well, sounded good, and the little speakers held a low “E” guitar note at wide open volume with no distortion or breakup.

I still prefer the tweakability of the Fenders, but these little Rolands are a good value. Check out the whole line at Rolandus.com.