Zarley Guitars: A Unique Solution To A Common Problem

“She had man-hands.…those meaty paws, I feel like I’m dating George ‘The Animal’ Steele.”
– From“The Bizarro Jerry” episode of Seinfeld 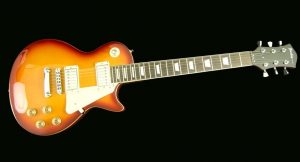 If your hand is too cumbersome to form a three-finger A-chord, perhaps Zarley Wide Neck Guitars are the answer. Zarley instruments, which emulate iconic Strat, Tele and Les Paul profiles, look great, are remarkably affordable and for some, most important, they are designed for guitarists with hefty “man-hands”.

When it comes to axes, Zarley Wide Neck Guitars, based in Charlotte, North Carolina, aren’t exactly a household name. That could change with the release of the company’s new product line, intended for guitarists who have large, unwieldy hands or those who just prefer a bit of a broader instrument neck.

The idea for greater spacing between strings was not born out of a marketing scheme and it didn’t come from corporate research and development. In this case, it’s an individual story.
Owner Tracy Todd explains online, “Zarley Wide Neck Guitars was established in response to my own personal experience being a guy with large fingers and hands wanting to play the electric guitar…. I struggled with my playing because I have large hands and fingers and constantly ran into issues with muting strings.”

For some guitar enthusiasts it’s all about having ample neck room. For instance, while it was in production, Warren Haynes’ signature ’58 Gibson Les Paul Standard had frets that were set over the neck binding in an effort to utilize the fingerboard to its maximum. It’s not clear if Haynes has “man-hands” or not, but it does look as though he likes full fret range. Wider necks are standard on all Zarley guitars.
At the nut, a Zarley neck is 1.875 inches. In comparison, a Les Paul Standard is 1.695 inches, an Epiphone Les Paul Standard is 1.68 inches and a Fender Eric Clapton Artist series Stratocaster is 1.650 inches. Zarley models have either a Rosewood or maple fretboard.

There are three lines of Zarley wide neck guitars; the Standard Series, which has a typical Telecaster body, the Player Series, Zarley’s answer to the Fender Stratocaster and the Reserve Series, a Les Paul imitation. Another well-known company, Ibanez, started out the same way, manufacturing replicas and look where that got them. Can you say Vai or Satriani?

Zarley has it covered when it comes to appearance. Of their Players Series, the “Ghost” looks like something Jimi Hendrix or Jeff Beck would have been seen with in their heyday. The beautiful Fender mock-ups are offered in blackout, white, sunburst or tuxedo finishes. For the Reserve Series, cherry sunburst, blueburst, brown maple and midnight are the choices.
All the right stuff is there for that classic sound; three single coil pick-ups on the Players Series, an “ash-tray” style bridge on the Standard and as is customary, two humbuckers on the Reserve.
The price could be the most attractive part of the Zarley package. The Standard and Players Series sell for $349 and the Reserve will set you back $399.

Though Zarley employs maple veneer tops on some guitars, the use of hardwood, for the back and sides, requires clarification. Furthermore, the company states they use “traditional” pick-ups. What, precisely, does that mean? For example, the Standard Series sports a lipstick pick-up, which is characteristic for a vintage Tele, but the specs for the Zarley are not clear and not posted on the company’s website.
If potential buyers do have reservations or questions about any of the Zarley models, the company has a customer service department that can assist them. With a price that can’t be beat, it’s worth a telephone call.

These are nice guitars iam geting the strat

Carvin’s necks are 1 11/16″ for six string electric guitars. Their wider necks are for 7 strings. Neck width has remained the same on Carvin’s for many years. That is something Carvin for many years has been unwilling to customize.

I grew up playing an acoustic with a 1.75″ nut and my present acoustic is a Seagull with a 1.75″ nut. So I just also like having a wide nut on an electric. Habit I guess. For playing open chords the wide nut is perfect for me, having bigger hands. But for heavy metal, playing lots of power chords or barre chords, I guess a narrow nut is better, though I play power chords just fine on any width guitar nut.

Carvin necks are just as wide, and readily available.