Connecting your Apple IOS device to the real-life musical world is an activity that’s been gaining more and more traction of late. It makes sense, too. You can access resources online, and get them into a piece of musical gear – which until recently was only an option if you had a computer nearby. That’s a bit cumbersome at band practice, on the road, or at a gig, however.

Digitech’s iStomp was the original, but …

One of the cooler guitar pedals that makes use of your iPhone, iPad, or iTouch is the iStomp, by Digitech. This came out about a year ago, sporting about twenty different virtual pedals. It’s a great little product, but now Zoom has arrived on the scene with their offering – the MS-100 BT MultiStomp pedal.

With Digitech’s iStomp, you could only run one pedal at a time – which made your hardware expenses a bit higher. In fact, when it first came out, we tried to figure out if it was even any cheaper than just buying all the pedals you’d be replacing: The Digitech iStomp – Download New Pedals To Your Pedal.

The iStomp is a great pedal, and the idea was innovative. But at the same exact price as the new MultiStomp by Zoom, and with much less flexibility, the iStomp now seems to pale a little in comparison.

Why the Zoom MS-100BT is a great deal 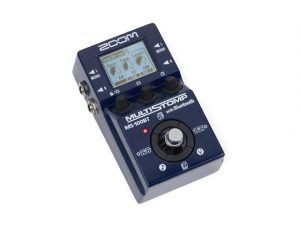 The MS-100BT is a Multi-effect amp modeler in a single pedal. The addition of amp models is one area in which Zoom exceeded the limits of its Digitech counterpart. When you pull the MS-100BT out of the box, you’ve got immediate access to 100 preloaded effects and models. You can also purchase more, using Zoom’s “StompShare” IOS app.

You can also use up to six of the effects and amp models at the same time. These can be arranged in any order – just like a real pedal chain.

The MultiStomp lets you choose between 92 different effect types, 8 amp models, from vintage amps all the way up to more recent technologies, and you also have access to cabinet and modeling controls so you can tweak your “amp” to your heart’s content. You can also combine different amps and cabinets if you’re a weirdo like that.

All of this is done on a fairly small two color LCD screen.

In addition to the 30 patches that are included right out of the box, you can set and save your own presets – there are 50 user slots available for that. 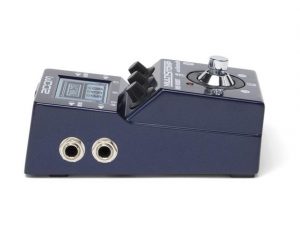 When you find a pedal you like on the StompShare app, you can read a detailed description of the effect, as well as some pre-made demos. You can also actually play with a demo of the pedal. You can add in the current effects you’ve got on your MultiStomp as well, so you can demo with your “real” virtual rig.

Once you’re happy with a pedal, you can download it to your iPhone (iTouch, iPad), and then zap it over to the MultiStomp via bluetooth. Pretty damn slick.

Is it really better than the iStomp?

We know it’s going to be cheaper – pedal for pedal – than the iStomp and much less expensive buying the same “real” pedals.

I know for a fact that the iStomp has some pretty incredible virtual pedals. They sound really good. I think we can expect the MultiStomp to have around the same quality as any other Zoom product, which is saying something with Zoom users like Dave Mustaine, John Petrucci, and Steve Lukather –  but I’ve only heard this pedal in various video demos – never in person. We’re going to try to get a hold of one of these and see what it can do.

You can check out the MultiStomp exact pricing and more details here.